Notes from the NumFocus 2022 summit

I recently attended the NumFocus 2022 summit in Santa Rosa, California. I was not technically representing the Jupyter Project (that was Ana, Brian, and Jason), but was asked to join in order to give a talk about the Jupyter Book and MyST markdown ecosystem.

Here are a few thoughts and highlights from the meeting as I remember it. I’ll write the stuff I remember and can update things if more comes to mind. Perhaps @jasongrout @ellisonbg or @Ruv7 could share their experiences as well?

The meeting itself was organized around two days, you can find the full schedule here:

It broadly had two tracks: one that was a “talk-style” track, and another that were unconference sessions with topics decided on the fly.

Here are two quick pictures to show the unconference schedule: 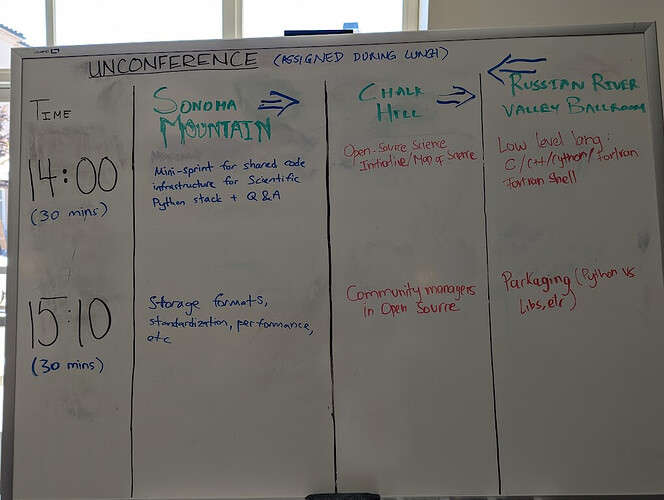 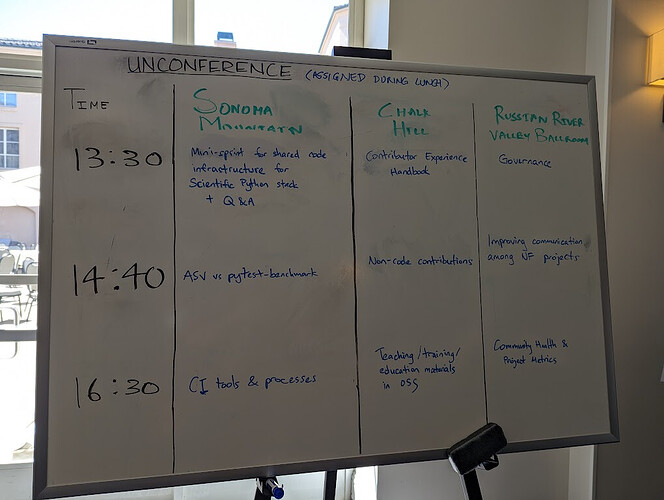 I gave a talk about the Jupyter Book and MyST ecosystems, and a bit about where those projects might be going. A short update about this is at the link below: 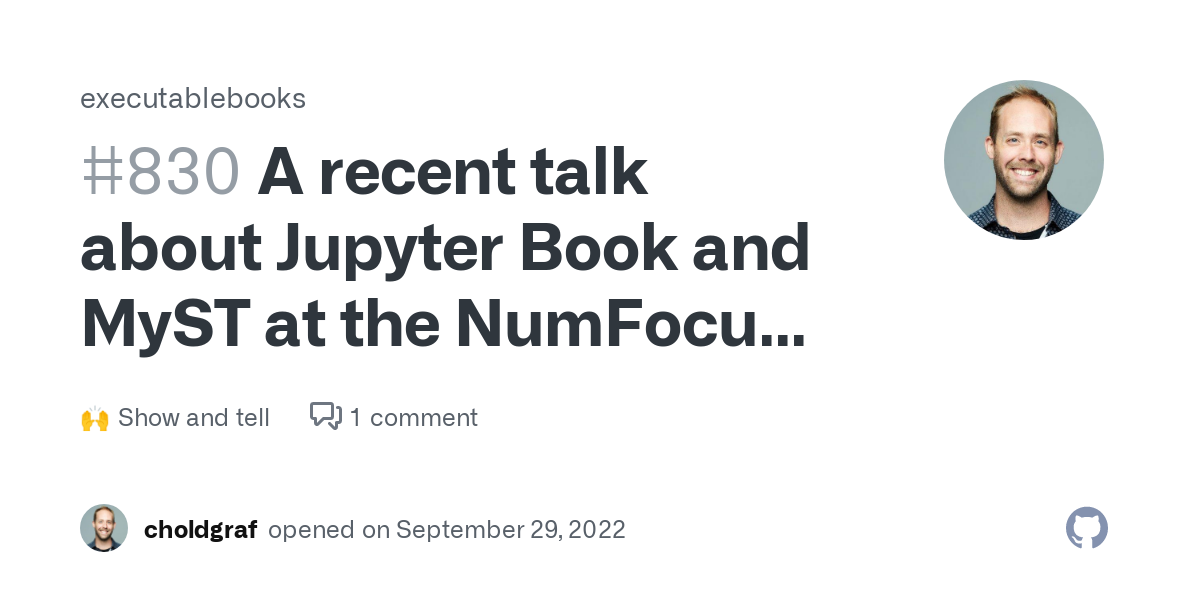 A recent talk about Jupyter Book and MyST at the NumFocus summit · Discussion...

I recently gave a talk about the Jupyter Book and MyST projects for the NumFocus 2022 summit. You can find a link below! link to google slides The talk basically followed three sections: Jupyter...

The Scientific Python folks were in a number of sessions at the conference and were interested in building networks, sharing infrastructure, etc. For those who aren’t familiar, check them out here:

We discussed a bunch of improvements to make in the PyData Sphinx Theme (which we use across a bunch of Jupyter projects) and may consider moving it to the scientific-python organization. They also described their specs process and there generally seemed to be interest from folks in participating in this:

Bitergia analytics for the NF community

NumFocus announced that they’ve got a partnership with Bitergia to run an analytics dashboard for projects in the NumFocus ecosystem. I believe this will be available to Jupyter projects if we are interested as well:

NumFOCUS and Bitergia partnered in providing metrics to the projects Foundation.

I also heard that the small development grant series at NumFocus is going to increase in size to something like $500,000 over the year. The maximum grant amount is also growing a little bit to ~$20,000. FYI for any sub-projects that have some focused development or team support needs.

NumFocus state of the union

Leah gave a “state of the union” talk about NumFocus’ current situation and where it’s going next. It sounds like one of the challenges that NumFocus has is that it only recovers roughly 30% of its operating budget from fiscal sponsor fees (the 15% that NF takes from grants and donations). It makes up the remaining 70% through donations, pydata conferences, etc. We had some discussion about the pros and cons of this, but there wasn’t a specific “conclusion” to this bit.

There was a nice panel discussion about various ways to grow maintainer communities via sprints and infrastructure for onboarding and training. I’m not sure whether the notes for this are public, but Reshama Shaikh from the scikit-learn project shared a video to watch as a nice prep, that others may be interested in: 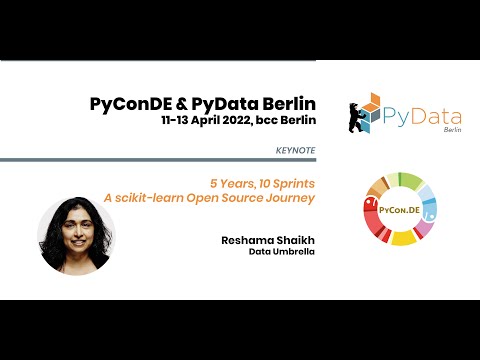 There was a conversation about governance and @jasongrout gave an update about where Jupyter’s governing model is heading. I’m not sure if there are notes from that conversation, but somebody shared my favorite document (The Tyranny of Structurelessness) so I’ll post it below

The Tyranny of Stuctureless by Jo Freeman

Thanks Chris, this is a great idea. I’m adding my notes here.

I’m looking forward to learning more about Bitergia and how the NF community will benefit from this! The announcement of funding from Anaconda as well as chatting with Georg Link (Bitergia founder) who is leading these efforts during his unconference session was definitely a highlight of Summit for me. I did ask about Jupyter participating in the pilot and have received positive feedback.

Melissa Weber Mendoca and Noa Tamir led an unconference session about their efforts to create a Contributor Experience Handbook. The team is rounded out by Inessa Pawson who is also one of the core contributors of this work. They are grant funded by CZI and the projects they are focused on are NumPy, SciPy, Pandas, and MatPlotLib. One of the key outcomes to date is the creation of a role they created called a Contributor Experience Lead. This work is in its beginning stages and they welcome feedback and participation on GitHub.

I missed her talk “Towards sustainable OSS communities” but learned of Professor Shurui Zhou’s research at University of Toronto during one of the unconference sessions. She and her team which is funded by IBM CAS, NSERC, NumFOCUS, and UofT CARTE is leading on some fascinating research on how to “help distributed and interdisciplinary software teams to collaborate more efficiently and build high-quality software”. Learn more about her research here.

Various community managers and those interested in community management gathered to share experiences and swap stories. There remains much work to be done in this area of OS but it’s exciting to see people from different projects gather to discuss this topic. 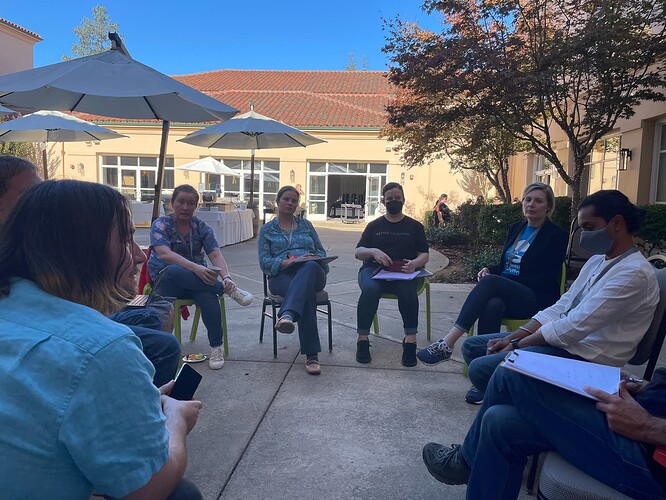 I don’t recall who shared this resource with me but I find it interesting. It’s called All Contributors and per their website it’s “a specification for recognizing contributors to an open-source project in a way that rewards every contribution, not just code.”

Another resource in this area is an 8 week online Zoom course for OS Community Managers. Per their website: “Scientific Community Engagement Fundamentals is an eight-week course designed to offer new or existing community managers core frameworks and vocabulary to describe their community’s purpose, refine or create strategic programming to engage community members around their shared goals, and identify ways to lower barriers to member participation.” Funding for these activities include The Alfred P. Sloan Foundation and the National Science Foundation (NSF). Read the syllabus here.

Finally, I will share that there are some public materials that are supposed to be shared by NumFOCUS in the coming days but they are understandably a bit overwhelmed right now. If I hear of or see updates I will share here.

A most sincere thank you to everyone at NumFOCUS and to all the community organizers who made this event possible. Great work!

As promised, there is additional follow up from NumFOCUS on GH. Note that it is a work in progress and I would expect additional info to be posted as time goes on - Issues · numfocus/project-summit-2022-topic-discussions · GitHub