Hi,
I am setting KERNEL_WORKING_DIR in the kernel via Enterprise Gateway running on kubernetes. While I am able to do so successfully, I am not able to make the directory writeable to the user running the kernel pod. It is writeable only for root. I do not have any external volume mapped to the kernel working directory path. Also I am passing KERNEL_USERNAME env variable to the kernel with the value same as the user running the kernel.
Any idea how I could change the ownership of KERNEL_WORKING_DIR path to the non root user?
Thanks in advance!

You can start the pod using UID and GID attributes but KERNEL_WORKING_DIR really has no benefit unless its using a mount. Also, it would be good to know if this is a factory-built image or something you’ve created/extended. No images we provide should be running as root. However, if you are using the UID/GID attributes (conveyed via the envs KERNEL_UID and KERNEL_GID), your pod will run as root unless the RunAsGroup feature gate is enabled. (Hmm. Unfortunately, it looks as though this particular feature gate was removed following > 1.22.)

Please open an issue or discussion item in enterprise gateway and we can try to understand and work through this.

It is an image that we built. I will do a quick comparison of the behavior by running the official build. In this case the kernel container is not running as root. It is running as a custom user but the directory that the pod/EG creates in the container using the path provided in KERNEL_WORKING_DIR has root as the owner and the custom user does not have access to write to it. 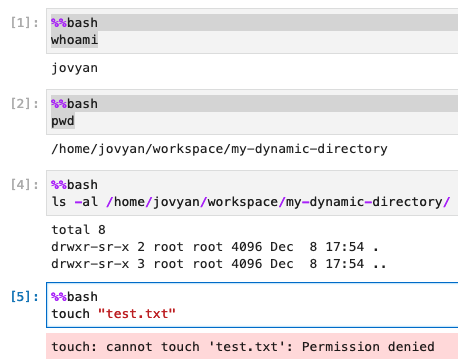 The way I got around this issue is by modifying the kernel pod yaml to:

Please open an issue. At a minimum we should adjust the permissions in the image.

Hmm - you might try EG 3.1.0, although I don’t think there were any changes in this particular are.

What created your workspace and/or my-dynamic-directory? 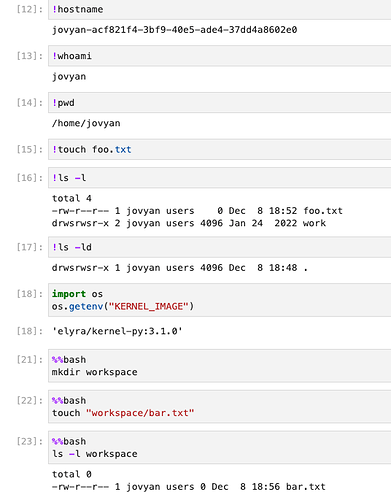 This isn’t a correct statement. Lab knows nothing about this environment variable. That said, I see what is going on.

When a docker container (and this applies to a k8s pod apparently) specifies a working directory that does not exist, it is created on the fly and prior to the switch of the user in which the container should be running as - as evident in this example:

There might be a way to resolve this using DOCKER_BUILDKIT=1 which I’d be happy to look into. Please open an issue.

You can workaround this by ensuring the directory is properly provisioned within the image prior to its use.

Thanks for your response @kevin-bates Really appreciate the detailed information and additional insights into the issue. I do understand that it is more of a kubernetes or docker behavior than a Enterprise Gateway one
I am sorry that I was not clear enough in my earlier response.
A little bit about our use case:
There is a set of users who use jupyter lab. They request remote kernels from jupyter lab. As users they have the freedom to use any KERNEL_WORKING_DIR path they wish to and they expect that directory to be writeable.

I am happy with my init container approach that I was able to come up with. So from my perspective I would mark this issue as resolved. Thanks!