Creating environment.yml for Python 2 via Binder

The docs for repo2docker contain a helpful section about how to export an environment.yml file with pinned versions using conda: https://repo2docker.readthedocs.io/en/latest/howto/export_environment.html

However, this did not work for me, because my original environment.yml looks like this:

So, obviously dependencies are missing as this just includes the packages I am aware of, but no transitive deps. When I run conda env export in a terminal, I get the information about the default Python 3 installation (partial output only):

(With the side issue that copying the output did not work as described, solved that by outputting to a file.)

Is there a way to tell conda to give me the environment for Python 2?

What I did do is adding a cell to my notebook running the Python 2 kernel with the following code and output, which looks like what I probably want (partial output only):

Binder to try this all out at https://mybinder.org/v2/gh/nuest/PLUC_Mozambique/master?urlpath=%2Flab%2Ftree%2Fmodel%2FPLUC.ipynb

Short update: When I try to use all versions found the above way in environment.yml I get the a build error: 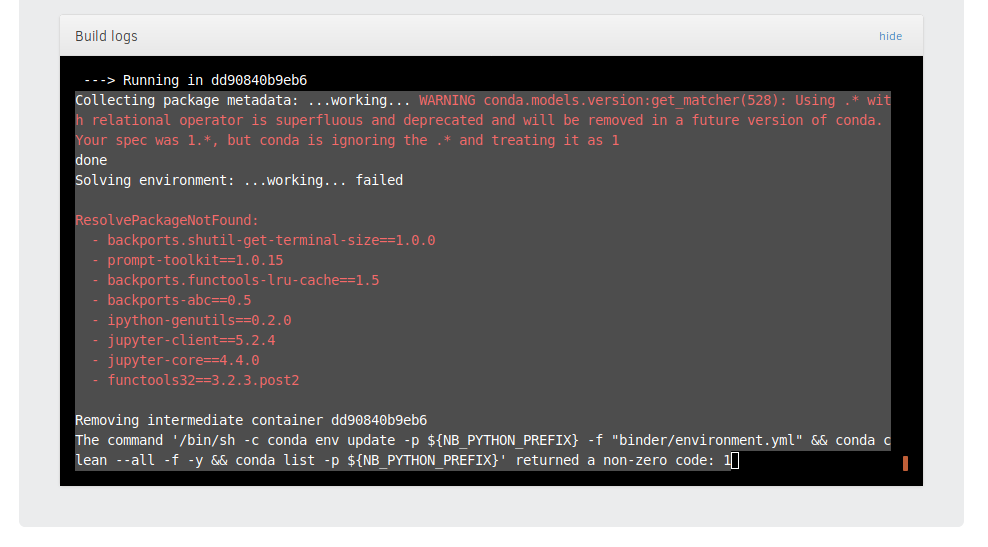 Which conda environment was active when you ran conda env export and where did you execute that command? If this was in a repo2docker container then the chances are that the env with Python 2 in it wasn’t activated. This is a known bug waiting for someone to fix it https://github.com/jupyter/repo2docker/issues/698 (this was also reported from the Turing way project but I can’t locate the issue. Do @choldgraf or @sgibson91 remember where this is?)

I'm sitting at a workshop at UW and we just realized that when you specify the environment for a repository in...

Thanks for pointing to the issues. This might all be expected behaviour, but I’m not a conda expert, so documenting some steps here:

But as you can see the root environment is still Python 3.x.

If I specify kernel, then I get what I think I want: 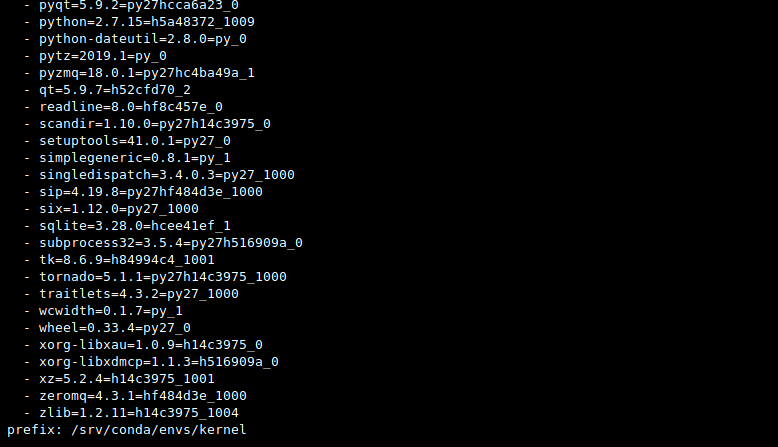 Should the instructions for pinning the version be updated to suggest using kernel instead of root ?

So, just noting here the way to dump the environment for different installed environments here for the next person to stumble upon this without proper conda knowledge.

I’ll take the other discussion to GitHub in the issues linked above.

Should the instructions for pinning the version be updated to suggest using kernel instead of root ?

Yes. Well, you should use the kernel env if it exists. Currently it exists when the user needs Python 2, otherwise there is no extra environment.

With https://github.com/jupyter/repo2docker/pull/737 I suggest to drop the named environment completely, because the desired version is activated in the terminal automatically. Is that feasible?

yeah, almost. We want that to happen all the time except when launching the notebook process itself. that’s the tricky bit.

So, could you in that case (and only then) explicitly activate the notebook environment?

It’s tricky, because we want the notebook process to start in one env, but then subprocesses launched by that process to activate a different env. One way is to do it explicitly, by making sure there’s a profile script that activates the env, like the one we are using now, then activate the notebook env by hand for only the initial entrypoint.

OK - so the PR is not feasible as is

Should the notebook process should be started with Python 3 always?