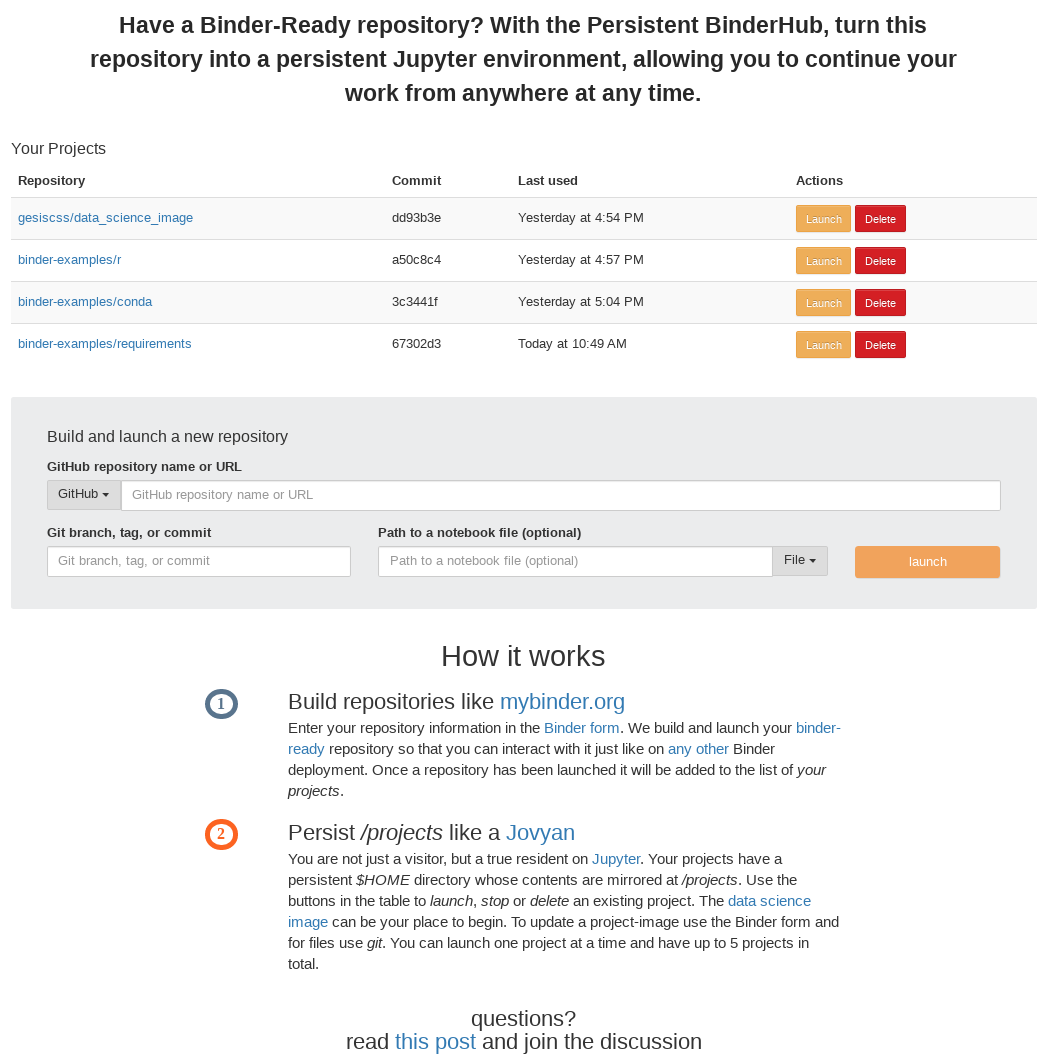 We deployed a test instance on notebooks-test.gesis.org, where you can try the described setup. To save build-time use the pre-built repositories:

Beyond making the code available for everyone interested we plan to introduce this on our production environment and appreciate any feedback and suggestions!

Our goal is to bring persistency to BinderHub. We want to unite the best of JupyterHub and BinderHub. From a user’s point of view we think the way forward is to enable a binder form on the home page of every user on the JupyterHub installation. To achieve this, we added 2 new features to BinderHub, authentication and persistent storage.

As a first step Authentication has been introduced and is supported by BinderHub since jupyterhub/binderhub/pull/666. You can get more information about enabling authentication in BinderHub documentation. The config we used on our staging server is as follows:

The overall desiderata for persistence were to enable multiple projects while keeping the behavior and established directory structure of vanilla binder environments. This lead to the following landmarks that guided our development:

/home/jovyan is also where repo2docker clones by default repository content to. So we had to find a way to copy repo content into the PV before it is mounted to the user pod. For this, we decided to use initContainers which

Once initContainers is done, the user’s notebook container is ready to start. We can then mount the same PV into 2 different locations, /home/jovyan with sub-path of the project folder and /projects/ where user can reach all projects:

Last but not least we (@arnim and @bitnik) want to thank the incredible Binder community for supporting this with awesome contributions and invaluable advice.

This is one of the coolest new features to arrive in BinderHub land!

Thanks a lot for working on this and having the patience with slow reviews, nitpicking, and questioning things. I am super happy to see this idea that can be described in 5min but takes months to build and get right “in production”!

Now … how can we offer this on mybinder.org

Being a bear of little brain (trying to think this through) and clarify some key differences. If I understand correctly:

There is one persistent volume per user that is always available via /projects independent of the project/docker-env currently run. /projects/$project_name is the subfolder for the currently active $project_name and mirrored to /home/jovyan.

@bitnik @arnim what does custom.binderauth_enabled do? I can’t seem to find an explanation in the docs? Is this something that’s available in the current BinderHub helm chart or have you configured it elsewhere?

Wonderful! Thank for you sharing this work and writing it up in detail.

I like the structure, placing the user in a project directory with files from other projects still accessible in /projects. I happen to have built a duct-tape-and-hot-glue implementation with the same structure on an HPC system (no Kubernetes available, unfortunately). One question that has come up is what should happen when users modify the software environment interactively.

In your test deployment, just as with normal Binder, the user has the ability to install additional software (i.e. to modify the content of /opt/conda/) interactively. That flexibility is important for experimentation. Of course, if a user stops and re-launches the Project, the software environment will be reset because a fresh container is launched. This seems good to me because it prohibits users from diverging from the Binder specification over time and creating a long-lived, irreproducible “junk drawer”. If the user finds themselves consistently needing additional software, it’s time to make a new Binder repo.

I have, however, heard some interest in persisting changes to the software environment by storing the stopped container and restarting it when the Project is restarted, a feature that another JupyterHub-like project provides. My gut feeling is to regard this as an anti-feature. Users may initially find it inconvenient to start from a clean slate each time, but in my view it guides them toward practices that will be beneficial in the long run. Have others given any thought to this question and how to respond to it?

So what does that mean exactly? Why does BinderSpawner need to know? Can it be used to allow access to private repos or is it just for labelling a pvc with the authenticated username?

BinderSpawner starts notebook server differently if auth is enabled or not (https://github.com/jupyterhub/binderhub/blob/8c51534a9517d40f82fa2546e99660e88d94f5e7/helm-chart/binderhub/values.yaml#L80). Before we had to define a new BinderSpawner when we want to enable authentication, but now we just have to set that setting (https://github.com/jupyterhub/binderhub/pull/1023/files#diff-1e5341c6eb671dbeb82d2c741e17f209). That is the purpose of that PR.

That setting is not related to accessing private repos or PVCs.

I’m trying to implement this myself on a test hub, but the redirection after authentication doesn’t seem to be working correctly. The output of kubectl logs HUB_POD shows that my authentication was successful but I’m not redirected from the “Sign in with GitHub” JupyterHub page. I followed the documentation here and here. Do you have any tips please?

Have you tried it with dummy auth? This will help to narrow down if the problem is the interaction with the external OAuth workflow or an internal problem:

So I started with just the dummy authenticator, which was fine, and then upgraded to GitHub oauth, also good. The issue started when I tried to implement the persistent storage with it. I’m finding it very difficult to distill what I actually need to do to make that jump from the example repo alone. Is there an accompanying blog post (or a plan to write one) that is a guide to deploying this and explaining where the IPs go? I think it would be really beneficial.

Is there an accompanying blog post (or a plan to write one) that is a guide to deploying this and explaining where the IPs go? I think it would be really beneficial.

We plan put forward more documentation. However, this is still very early and even at GESIS we do not have this in production.