When Juliette made the amazing comic for Binder, I thought it was funny that all of the technological magic that you’ve all put your time and skills into was represented by the tiniest Docker logo in the corner!

At the Turing Way book dashes, we’ve been joined by the brilliant illustrator Matt from Scriberia who was creating some fantastic images to be included in the book. (If any of you follow @KirstieJane on twitter, you may have already seen a few!) So I sat down with Matt to create an accompanying image of the working parts of a BinderHub, and here it is! 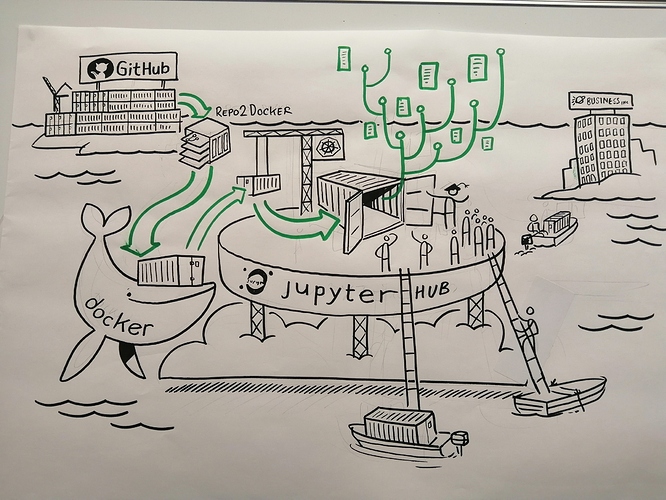 We have a Docker whale delivering a container from repo2docker to JupyterHub, the Kubernetes crane is managing all of the containers on the Hub, the Hub is built on the cloud, and users and classes/workshops are coming along to look at the contents of the open container. One person loved it so much, they’re taking a clone back to their business!

I’m so thrilled by this! I think he did an amazing job of capturing a complex technology given that a lot of the words probably meant nothing to him and I just wanted to share it with you all

When these images are finished and digitised, they’ll be available on the Turing Way repo under a CC-BY license so anyone can re-use them.

If I were to ask for the word Binder to be put on there, I’d put it on the floor of the JH with the people stood on it to show it’s a platform. But really, I see this as an “exploding out” of the Docker logo in the corner of Juliette’s comic so the two images compliment each other

Illustrations created by Scriberia as part of the Turing Way book dashes in Manchester on 17 May 2019 and London on 28 May 2019. They depict a variety of content of the handbook as well as book sprint activities and the Turing Way community in...

whoooah these are so cool! I will never understand how illustrators can do what they do, it is like magic to me

Haha, yup! He was the most productive person at the book dash, by far!